How Districts Maximize Their Free and Reduced Lunch Funding

Maximizing school district funding value is crucial in the education landscape of today. School districts work hard to ensure that every penny of available reimbursement dollars is fully accounted for.

Tracking and validating those various funding sources is rarely a straightforward process. Subsidized lunch programs are a niche area representing an outsized source of funding that many districts struggle to leverage effectively.

"...if we were off by 1, 2, 3 or 5 kids - measured over a whole year of 180 days - multiplied by the missing $3 per student reimbursement, those dollars add up pretty quick.”  - Richard Silvernail, former Director of Technology for Florence County District 5

According to the USDA’s Funding & Nutrition Service, over 30 million students were enrolled in the National School Lunch Program in 2016 alone. For a district of with an enrollment roster of several thousand, missing or incorrect meal program information for even five percent of students could easily amount to a six-figure sum of lost potential funding.

The Lunch Status Exception Report, a powerful tool tucked neatly within the Food Services Connectors Bundle, empowers districts to easily identify all students in their rosters who quality for subsidized meals, and maximize their claim to meals program funding dollars from appropriate state and federal agencies. 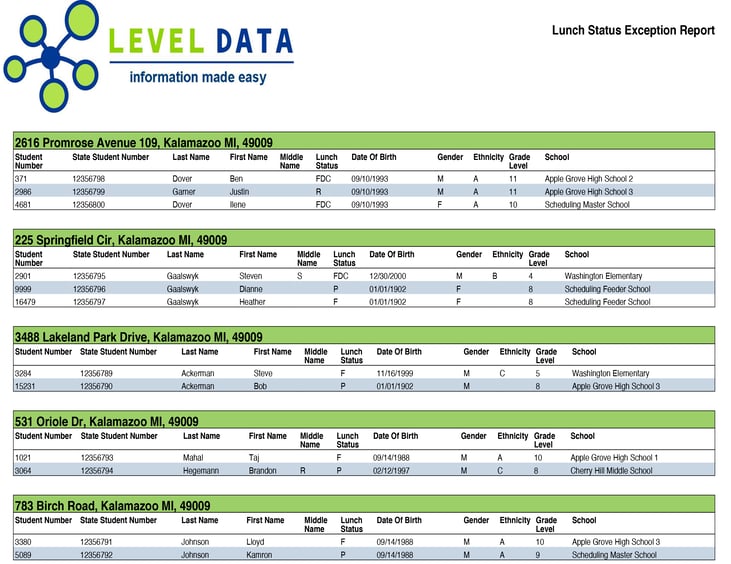 According to rules for the National Student Lunch Program, eligibility for free and reduced lunch programs are extended to all K-12 students sharing a common home address. Though this may seem easy enough to tally, many districts struggle to accurately identify students in their schools who meet the threshold. The LSE Report automatically scours a district's SIS and flags students with duplicate home addresses. In addition, qualifying students are also assigned a letter rating according to the level of meal subsidization they may be suited for.

With that information in tow, a district can confidently file accurate claims for meals program funding and reimbursement with the appropriate state and federal agencies without the need for students or parents to jump through additional bureaucratic hoops.

“Some students fill out the necessary forms, but others don’t, and previously, we had no way of knowing if those students were in the same family or household." - William O., former Senior Systems Analyst, Kershaw County Schools

Depending on the district’s overall size and tallied poverty score, a substantial amount of money could be left on the table if all qualifying students aren’t accurately reported. For many districts, their initial investment is paid for many times over using the newly discovered reimbursement opportunities delivered by the LSE Report.

Former Director of Technology for Florence County District 5 in South Carolina, Richard Silvernail, knew these struggles first hand. “With things like foodservice, it’s hard to tell exactly how many dollars we missed out on over the years,” he said. “When we had to send in our final reports to get funding on such things as free and reduced lunch, if we were off by 1, 2, 3 or 5 kids - measured over a whole year of 180 days - multiplied by the missing $3 per student reimbursement, those dollars add up pretty quick.”

Kershaw County Schools in South Carolina shared a similar story. “Our school district – and so many other schools – struggles with verifying students for the Free and Reduced Lunch program,” noted their former Senior Systems Analyst, William O. “Some students fill out the necessary forms, but others don’t, and previously, we had no way of knowing if those students were in the same family or household. Now we know, and we receive more federal funding as a result.”

Beyond meal program subsidies and reimbursement, this synchronizing bridge between a school’s SIS platform and the lunchroom improves the ability to serve the broader student population as a whole. Tammy Knapp, Data Systems Manager for Dekalb Central Schools in Indiana, spoke to the ways their processes have been improved. “We’ve also seen great improvement in tracking student meals in Meal Magic,” she said. “Parents call often asking about their child’s meal balance. Level Data allows us to have an answer to that immediately because the information is loaded into PowerSchool every night. It’s accurate and it’s current.” Instead of hunting around for minutes, this information is readily available at a user's fingertips.

Safeguarding student wellbeing is a major concern of school lunchrooms nationwide. When considering food-based allergies or restrictions, the confidence found in always-accurate student data enables districts to help protect student health in a far greater capacity. Revere Public Schools in Boston used this solution to tailor the way their lunchroom approaches a student population with diverse dietary needs. “There’s approximately 3-400 students in our district that have peanut, milk, or dairy allergies,” shared Jim Sicuso, Director of Administrative Technology. “Thanks to Level Data, if a student chooses an item they’re allergic to, our cashier can alert them and help them make a better choice. Nurses are very happy about this change.”

The bridge between a school’s lunchroom the district’s central SIS is formed by Level Data’s Food Service Connectors bundle. With this bridge running in the background, the data contained in both locations is kept accurate and up to date at all times. The central offices can see student lunch balances and the lunchroom has current data about students moving into schools, between schools and transferring out of the district altogether.

In the end, the amplified accuracy and data confidence yielded by the Food Service Connectors bundle makes winners out of everyone in a district - students, parents, faculty and staff alike.

David Barrett is Level Data's Digital Marketing Specialist, having joined the team in 2019. With a large family filled with teachers and school administrators, David brings a lifelong passion for education and a background in content creation and digital marketing to the table. His prior experience covers a diverse range of industries that includes real estate, eCommerce and freelancing for nonprofits and small businesses. In addition to digital marketing, David is an accomplished photographer, coffee-enthusiast and self-professed creative nerd. 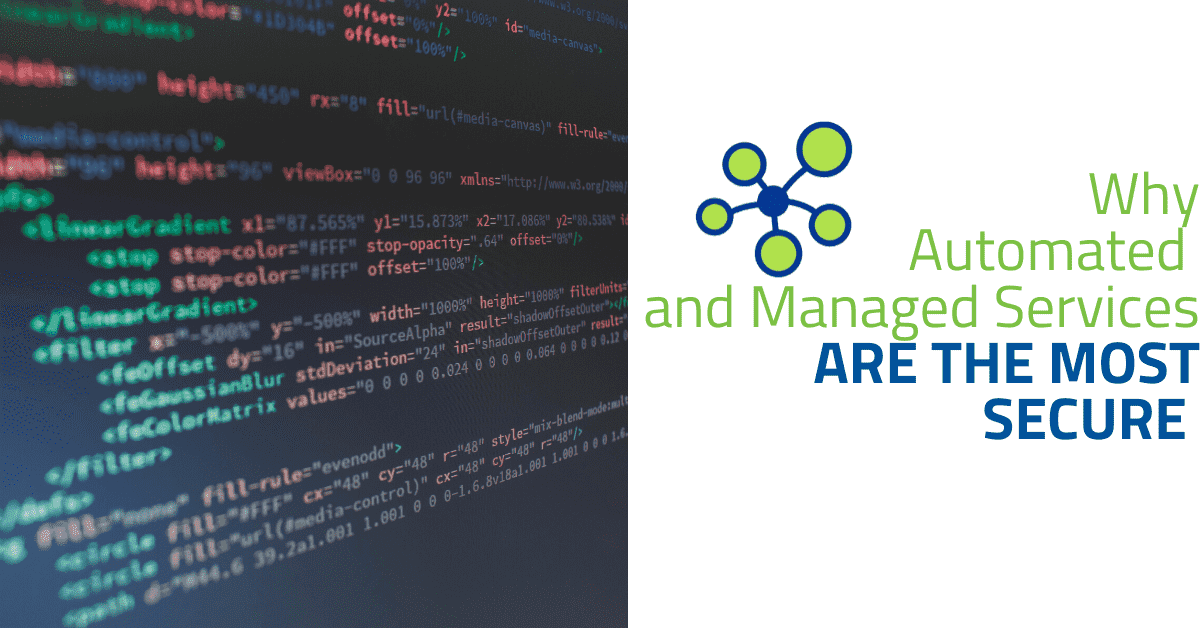 Why Automated and Managed Services Are the Most Secure 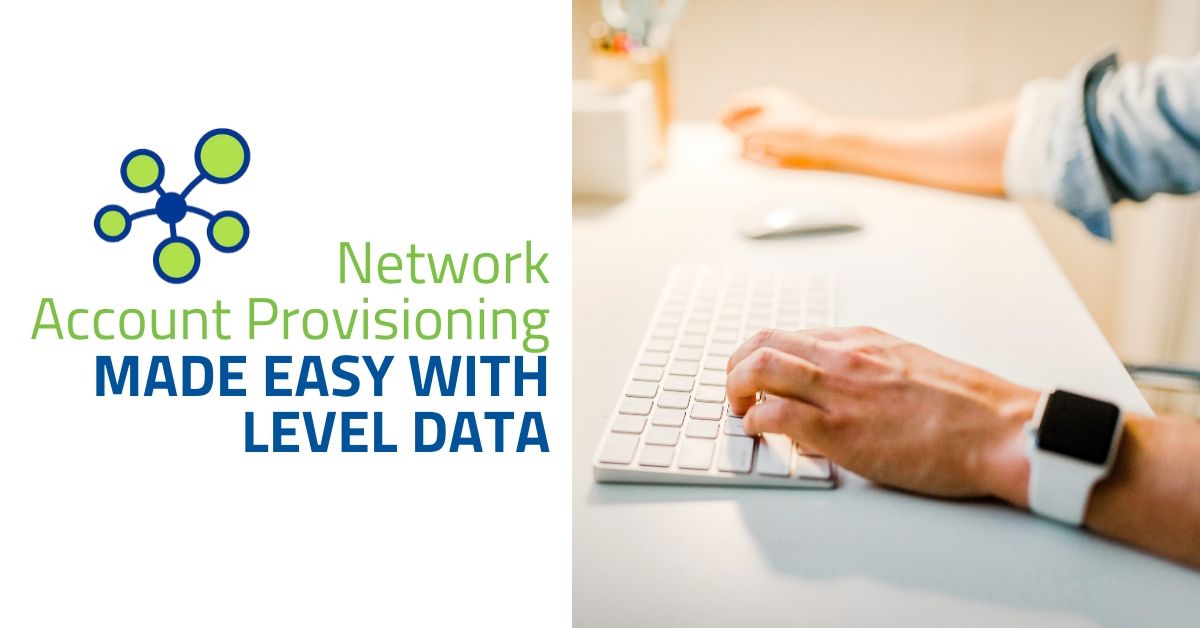